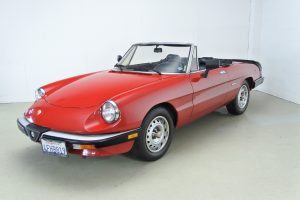 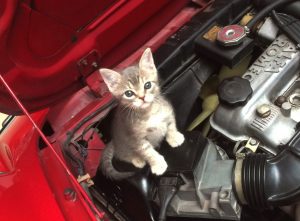 From the Bartolini Collection – Recently acquired from our 86-year-old friend and machine shop owner with a stack of service records from the last 30 plus years! Sergio bought the Alfa from his friend and client, J.R. Tappan with the intention of modifying it with a poly-cylinder Italian engine, but the years accumulated, and other projects took precedence. We purchased the car in August of 2019 to give it the love it deserved. During engine servicing and maintenance, a kitten was discovered living somewhere in the bowels of the engine compartment. One can imagine the shock experienced by the technician when, on attempting to remove sparkplugs, the feral cat sunk claws and teeth deep into his hand before disappearing again into a cavity under the car.

During ‘author appreciation week’ we loaned the spider to sci-fi writer and philosopher Ivor Peter Brians to do his morning coffee-shop runs. We look forward to his writing the car into an upcoming novel but, as he’s not taken to frivolity, we imagine more humorous escapades ensued when our nighttime security guard Dutch Doubleclutch snuck the spider out on one of his taproom ale runs. Just one we heard about was when Dutch, sufficiently lubricated, missed a shift as his foot slipped off the clutch and he heard a, “Yeeeooowww,” followed by twenty claws sunk into his face …

The cylinder-head and gearbox were previously overhauled—and we just had her serviced to address storage related issues and had a new clutch installed (disk, pressure plate, complete).

There are still some details which could be attended to (after all, she’s 34 years old now!). She has the optional air-conditioning, but we did not explore getting it going.